Iconic Achievers Award was held on September 29, 2018, in Mumbai. The event was graced by many celebrities like Nakuul Mehta, Tridha Choudhary, Samir Soni, Hina Khan, Nikita Dutta, to name a few. While the Ishqbaaz actor bagged Entertainer Of The Year' award, Bigg Boss 11's runner-up Hina Khan bagged the 'Most Stylish Personality Of The Year' award at the event. Apart from Hina and Nakuul, Nikita Dutta, Jannat Zubair Rahmani and Samir Soni, Saurabh Raaj Jain and others bagged awards at the event. Regional College of Polytechnic,Lucknow too bagged an award at the event.

We have immense pleasure that our College Regional College of Polytechnic has been Awarded, “ICON OF THE YEAR 2015” as the “ POLYTECHNIC COLLEGE OF THE YEAR” on the 35th Award ceremony conducted by Brands Academy held on October 9th 2015 at GOA. It is a proud moment for all our staff and the Management for getting such recognition on a national forum and this award was received by our Director- Mr. Rajesh Kr. Prasad. He received the award at the hands of the great living legend MILKA SINGH and Honourable Dy. CM of Goa, Mr. Francis dsouza. Others who were honoured with Awards at this 35th Brands Academy Icon Of The Year evening were - International Fashion designer Ritu Beri, Ravi Kishen, Sunil Grover(Guththi), Kailash Kher, Gaurav Chopra, Rohit Roy and legendary actor artistes Om Puri and Kader Khan.

“Global Education Excellence Award–2014” Conferred to Lohiya College, Lucknow by the Prime Time Research Media Pvt. Ltd. at a ceremony held at Hotel Crowne Plaza Today, New Delhi on 09th March 2014. It was a proud moment for “Lohiya College” for being the recipient of Global Education Excellence Award 2014 from Prime Time for being the “Best Professional and Technical Training College in Lucknow”.

In recognition of its excellent work in the field of technical education, Regional College of Polytechnic is again awarded by Worldwide Achievers, as the "Best Polytechnic Institute in Uttar Pradesh of the year, 2014". The India Education Excellence Award 2014 ceremony was hosted by the by Worldwide Achievers in association with several media houses at The Oberoi Hotel, New Delhi on the 14th of April 2014, under humble presence of Dr. Shashi Tharoor, Minister of State for Human Resource Development (HRD),Govt. of India and Shri Maninderjeet Singh Bitta , the chairman of the All-India Anti-Terrorist Front (AIATF), and former chief of the Indian Youth Congress and Rameshwar Prasad Chaurasia,Rastriya Sachiv,BJP.

Regional College of Polytechnic,Lucknow has been conferred with three prestigious awards at the 10th Construction Industry Development Council (CIDC) Vishwakarma Awards 2018 at a ceremony held in Delhi. The CIDC Vishwakarma Awards are organised by CIDC, a joint establishment of the Planning Commission, Government of India and the Indian construction industry.

Rajesh K. Prasad, Director, Regional College of Polytechnic, Lucknow has been awarded with the “NATIONAL EXCELLENCE AWARD” for Outstanding Individual Achievements & Distinguished Services to the Nation. 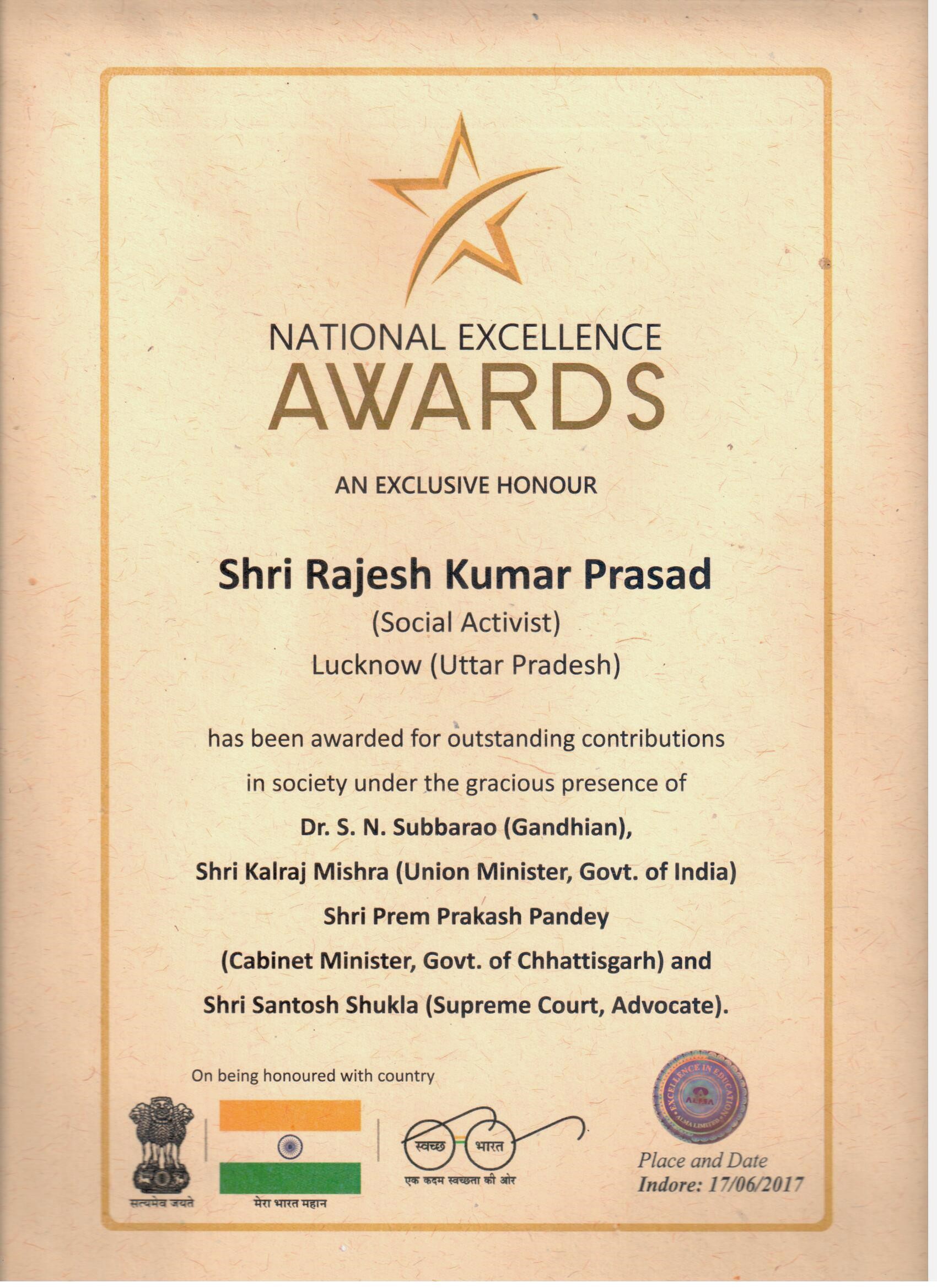